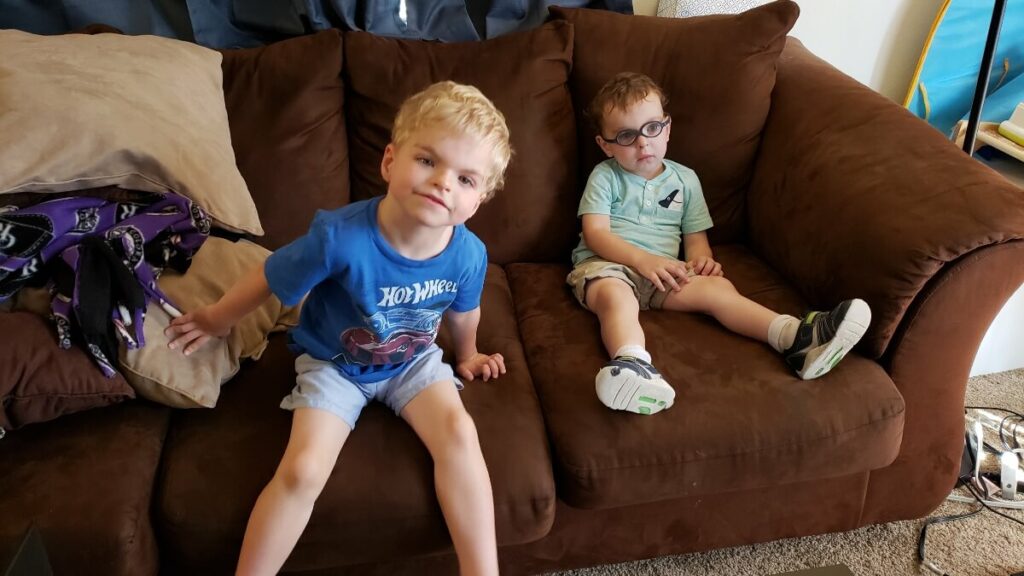 Autism can be hard to understand especially for a toddler.

All my son wants is just a relationship with his older brother, who up until a few months ago wanted nothing to do with him.

Two boys with completely different personalities: Nicholas who is laid back, keeps to himself, quiet (most of the time), and has autism; and Daniel who is outgoing, social, independent, strong willed, and most of all, persistent.

For a long time I didn’t know if my boys would have a good relationship with each other.

I always knew something was there, though, because of how they’d react when the other would get in trouble.

Both are very sensitive and even though Nicholas wouldn’t want to play, he would still get upset when Daniel went in timeout.

Daniel doesn’t see his autism though.

He just wants to play with him and be like him.

He screams just like Nicholas when he gets excited.

That’s how Nicholas communicates because he doesn’t talk. But Daniel doesn’t get that.

Even if he did understand, it wouldn’t matter to him. He just wants to be his friend.

Nicholas is sensitive and likes his space.

He gets overwhelmed very easily when overstimulated.

He would move away when Daniel would try to play with him.

Daniel eventually moved on to his sister Grace.

Those two have a strong bond, always making each other laugh and playing together.

Even then he never gave up on his brother.

He allows him in his space and lets Daniel touch him. Nicholas doesn’t move away anymore or get stressed out when he’s around.

They play together and laugh with one another.

Nicholas communicates with him and gets his attention by touching him, making eye contact, requesting “more” with sign language, and getting really close to him. It’s truly amazing.

They’re both in school four days a week. Being around other kids have helped their social skills in different ways that has helped their relationship blossom.

Plus, being away from each other every day makes them miss one another.

Recently, Nicholas started playing in water, which was really difficult for him.

I know that watching Daniel have fun in the bathtub and play at the splash pad has a positive influence on Nicholas. He wants to try new things because of his brother.

Of course, like all siblings, they get annoyed with each other still.

Sometimes Daniel rejects Nicholas’s request to play, which is hard to watch. But it never lasts long. They love each other so much.

They share a room which has helped bring their friendship where it is now.

I wrote something in July for Daniel’s 3rd birthday about not giving up hope on his brother.

A month later Nicholas finally came around. His perseverance paid off.

Their relationship is special.

I know they’re going to take care of each other because they always have.