Assistive Technology for Kids With Autism

A Speech Device scared me. I thought it would limit what little verbal communication my son had. I was scared that he would go silent. I was scared he’d get teased. And honestly, I was worried to try something new and fail.

If you have a kiddo who is nonverbal or has limited communication I am sure you have heard about Talking Devices, Speech Devices, or Assistive Technology. And if you are new to the world of Autism it can all seem a little bit scary and overwhelming. When Cooper was 3 we had a speech therapist recommend trying a talking device. My first reaction was absolutely not.

At that time I was still wrapping my brain around the idea of my son not speaking. The term nonverbal autism was one I hadn’t heard before. I was sad and scared and a whole other bunch of emotions mixed in. I kept telling myself if we held out a little bit longer he would start talking.

It also felt in a way like giving up. Thinking about having a computer talk for my son was more than I could handle.

It was also overwhelming. The only thing I new about a speech device came from Stephen Hawking movies. At that time I said no to the device. I opted to start with a PECs instead. It felt like a good transition.

I immediately threw myself into implementation. I purchased a binder off Amazon with pre-made pictures. I paid a dang fortune. I think it was close to $150. I remember being so hopeful. So excited. It, like so many of my great ideas, failed. Even though the pictures were laminated Cooper completely destroyed them. I found them in the garbage. I found them crumpled up behind couches and chairs.

I want to be clear here. When I say PECs failed what I am really saying is I FAILED. When my son was diagnosed I would try things. I would hear about a therapy or tactic or diet and I would try it all. But I was never really trained on how to do any of it and MOST Autism type stuff needs training. That’s a fact.

Shortly after Cooper started using PECs in 3k and had huge success. He had a fantastic teacher who was able to troubleshoot and teach him. Unfortunately we could never make the switch to using a paper PECs system at home. It just wasn’t for us. And honestly, it was fine. Cooper has amazing nonverbal communication. This is a good thing and a bad thing. The great part is we never doubt what his needs are. We do a lot of questioning with simple ‘yes’ or ‘no’ answers. He has a sign for no and verbalizes yes. The bad part is we don’t always push him to verbalize since we know what he needs. This is common for parents. We just ‘do.’ We don’t always ‘ask.’

When Cooper turned 5 we were once again reintroduced to trying a Communication Device. We had a fantastic Speech Therapist who said it would drastically help Coops. Again, I was nervous.  I thought it would limit what little communication he had. Even though he had no words I was scared of regression. I was scared that he would go silent. I was scared he’d get teased. And honestly, I was worried about trying yet another tactic and failing.

A little over a year ago cooper started using his Speech Device. His SLP introduced us to a company called Talk To Me Technologies. She was the intermediary between us and the company and helped us figure out payment and then implement the device. It was a wonderful experience.

My advice to you….Work with a professional. Getting Cooper to communicate using the device was way more than I could’ve figured out on my own. Without the right support I might have quit. 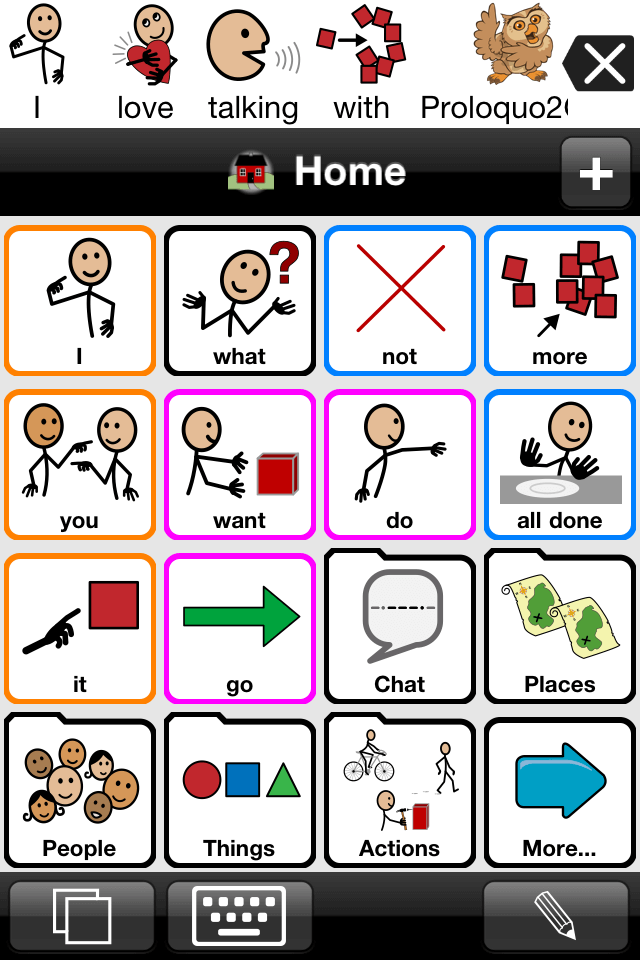 possible to get a device without consulting an outside company! You can work with your SLP to determine the most appropriate device and program for the client (i.e. which works the best for the client’s motor and cognitive needs regarding size and selection of buttons and portability of the device, as well as the type of vocabulary that is available)

The speech device allows for Cooper to verbalize his emotions. He can now tell us when he is sad, mad, happy or feeling silly. This option has drastically reduced his meltdowns.

The device itself is a large, heavy duty iPad with a case. The only program on the iPad is Proloquo2. Cooper would not be able to use the iPad successfully if there were other apps on it. He knows this device is solely for communication.

The Proloquo2 app is an Augmentative & Alternative Communication (AAC) app that can provide a voice for those with expressive and receptive language difficulties. In a sense it is a version of PECs on a device. Cooper pushes a picture and the device says the word. After a year Cooper can now ‘say’ full sentences. You can use preloaded pictures or upload your own. We do a combination. Cooper does best with real-life pictures.

Once you have decided the best device and program for your kiddo, there are several options for funding:

I get so many questions about Coopers communication device. The system he uses is Proloquo2Go and the iPad is from Talk to Me Technologies. He loves his pad so much. He likes to be silly and play with us.
The number one question I am asked is if it limits the speech he currently has. The answer is no. If anything it’s improved it. I was doubtful just like you might be. Before I even knew what nonverbal was I said to Coops dad that I was scared of him talking through a computer. My fears were valid but wrong. It’s a great way to engage. If you have more questions leave a comment and I can answer them all in a blog post. #autism #nonverbal @talktometechnologies