They Need to Communicate 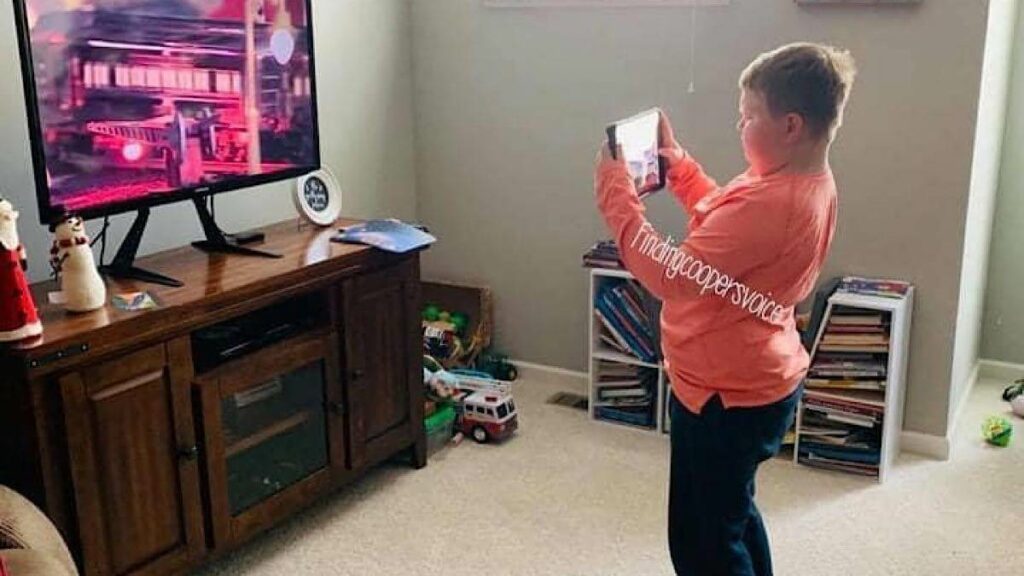 I read a comment on the internet yesterday that said teaching autistic children to communicate is abuse.

The commenter said that if a child is unable to communicate than teaching them is abuse.

Let that sink in for a second.

I let it sink in for the last 24 hours. I kept thinking I would find some pearl of wisdom in the persons way of thinking.

But I haven’t. Not yet anyways.

Because I want to learn. I want to do what’s best for my son.

When he was diagnosed with nonspeaking autism at age 3, he couldn’t communicate at all. Not verbally, or with sign language, or by pointing.

He couldn’t tell us happy or sad or mad or pain. Or that he was ready to leave a place or wanted goldfish crackers instead of veggie straws.

Instead, he just screamed. He hurt himself and others and property. I did everything I could to become a mind reader, but I often failed.

Cooper once suffered with an ear infection for a week before his ear drum burst. We had no idea.

He was once kicked by a therapist in the stomach and the only reason we knew is because they caught it on camera. He never told us.

He once removed his own toenail because his anxiety was so high over something. We never found out why.

He would run into streets towards moving cars. He would sit in parking lots. The screaming was intense.

He had very hard years. It wasn’t until we gave him the tools to communicate and poured ourselves into helping that his life got easier.

These are all forms of communication. All valid. All wonderful. We focus on all of them. We give our son as many tools to communicate as we possibly can. Some don’t work for him. Some do. Some he tries and some he refuses.

We never push him too far. But we do try as hard as we can to help him communicate. And because of it, he is thriving.

He told me that his ear drum hurt last week.
He says ‘H-O-M-E’ when he wants to leave somewhere.
He points to the foods he wants.
He uses his speech device to ask for his grandmother and grandfather.
He tattles on his younger brother.
He asks his older brother to swim.
He tells us when he is mad and sad.
He tells us where he wants to go and things he wants to do.

His aggression has almost ceased. So has his self-injuring behavior. He hasn’t broken a mirror or a light bulb for years. He can walk near roads.

All because he can communicate.

Wanna know what abuse is….or looks like…because it’s what keeps me up at night as a mother to a precious boy with a disability.

My son not being able to communicate that someone physically hurt him or sexually abused him.

My son living with pain because he can’t communicate it.

My son feeling sad, angry, frustrated and being unable to communicate it.

My son hitting his own head because we can’t understand him.

My son not being able to communicate yes or no, for little and big things.

My son running into the street towards traffic because he’s ready to leave.

My son not being able to say/type/point to his name if lost from me.

I share all of this, and I know it’s a lot, because it terrifies me to think where a child be without communication, in whatever form.

Do everything in your power moms and dads to give your children the tools they need to communicate.

I have never met a happier boy than my son. And when I think back to how scared he must have been, back before he could tell us that his head hurt, or he missed Grandma, or that he wants to ride an elephant, I want to cry.

Keep teaching your kids moms and dads. Never give up on them.