My son is nonverbal. Although I’m not supposed to use that term anymore. The preferred term is ‘non-speaking.’ I am tired of arguing about descriptions so I will just explain. I think it’s easier that way.

My son is eleven years old. And he has very few actual words. It’s hard to believe but it’s important to understand. It’s important to take a glimpse into someone’s life sometimes. That’s how we learn.

He can say his name if asked. Cooper. He makes a sound for each letter. Six sounds. The two o’s consistent. But the sounds don’t match the letters.

I know he’s reading as he says it. As if the letters are above his head and he plucks them down one by one. He can say his brother’s names in his own way. It’s the most beautiful thing I’ve ever heard. Every time my heart bursts. It will never get old. He has a few other words too. But not a lot.

He doesn’t speak willingly though. He’s never told us his favorite color or why he loves trains. He’s never said goodnight mom as I pause at his bedroom door or yelled I love you from the front door. He can’t always ask for help or tell me if he’s scared or if his ear hurts. It’s like the words get stuck inside. Unwilling to come out.

He yells a lot too. He has too. So people will listen.

Nonverbal. Non-speaking. No words. That part gutted me the most 8 years ago. My heart has bled. My eyes have leaked. I’ve wished and hoped and prayed. I’ve been angry and sad and bargained. But it’s not about me. I’ve learned that.

See, he is so smart. And so bright. Funny. Silly. Creative. He has so many feelings and things that he loves in this world.

But very few people know. Because speaking is synonymous with value. That’s the world we live in.

Non-speaking is less than.
Nonverbal means having nothing to say.
People assume he is not smart. They assume he is simple.

He’s anything but simple. He’s more.

This morning he used an episode of The Bernstein Bears to ask me for pancakes. Papa Bear yells out to his Cubs…pancakes kids! And Cooper laughs and taps his chest. He loves pancakes.

After he asked me for fireworks. He adores fireworks on tv but is scared in real life. So he shows them to me. Flashes and bursts of color on the small screen. And then taps his chest. And waits for me to tease him about watching fireworks. I tell him we are going to watch them together and he pretends to be scared. Then we laugh. And he runs away, away from the fear, away from my loving teasing.

He wants to drive a race car. And go on an airplane. He wants to take a train across the country. He wants to ride a fire truck. Barney and Dora are his friends.

See he has all these plans. And they live in his head. Because he is brilliant and smart.

I’m not sad about non-speaking for me. I was at one time. When my yellow haired boy was little. But now he is a tween. And he’s exactly who he is supposed to be. I don’t grieve much anymore. Like most things, my feelings have changed and grown.

Now, I’m mad for him. I’m frustrated because I know he has things to say and can’t say them. They are locked inside and that has to be so hard.

I see him wave and get no response. I see him sign or muster up the strength to pluck the letters from the sky to say ‘H-E-L-P’ and no one listens.

I am angry. I grieve for him because he deserves the world.

If you were a fly on our wall, in our home, you would know that we listen when Cooper communicates. Whether it’s with an iPad or a speech device or sign or a scream. We listen. Patiently. He deserves our patience.

We hang on every word. And we translate for him.

If you get a chance to meet Cooper, and he communicates with you, know that you have received a gift. A very special one.

He wants to be a bumblebee for Halloween this year. We are already counting down the days.

He likes to buzz around. With his arms as wings.

Last week he went on a trail ride. Midway through he pointed to a dandelion. One with fuzz that was full of wishes. He pointed and squealed with joy until we got him one.

He tried to blow. But the air wouldn’t come out. So he handed it to me to do for him.

And I did. I smiled and gave him my wishes. 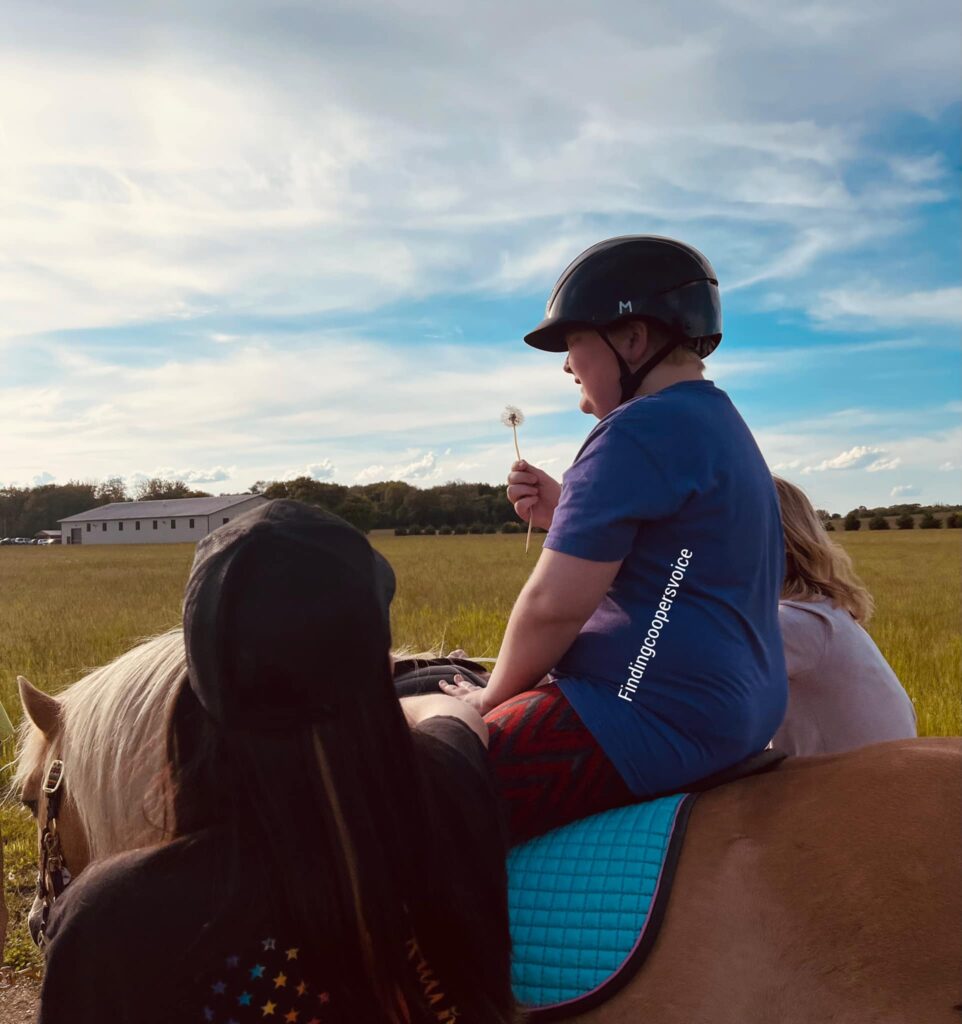